Dirty Excerpt: Come on Down by Patient Lee 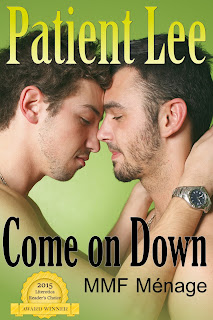 Click here to view on Amazon.
For All Romance.


James and Caylin enjoy an evening of Netflix and chill with Happy Gilmore, but when James hears Bob Barker's voice, he flashes back to an evening with the guy down the street when they were eighteen. He knows he needs to experience sex with a man again, and Caylin has a plan to make it happen.


"I need him," Stefan growled, pulling the condom off and throwing it in the garbage.

"Well, I have to pee," she said. Caylin ran to freshen up, leaving Stefan and me alone for a moment. I felt the urge to cover up, and I caught myself reaching for a pillow. I adjusted it under my head instead. Stefan lay down next to me and reached to kiss me. He pressed his body against mine and wrapped his hand around my back. I listened for the voice in my head to remind me how gay this was, but it was silent.
His kisses were hard and aggressive, not soft like Caylin's. His stubble grazed my lips, thrilling me with its masculinity. This was nothing like kissing a woman. This was like a battle, but I couldn't tell if I wanted to win or lose.
"I need you to fuck me," he muttered into the kiss. "There's condoms in the drawer over there." I grabbed one and put it on, still listening for the voice in my head to call me a fag. When it didn't, I smiled and kissed him again. He spread his legs, and I pushed them back to allow me access. A silly grin crossed my face as I lined my cock up against his asshole. There was little resistance as I pushed inside him. He'd done this plenty of times before. I fucked him slowly, reveling in the tightness of his ass and his cock sticking up in front of me. I jacked it while I fucked him, staring in his eyes the whole time.
I didn't hear Caylin come back in until she whispered in my ear, "That is the hottest thing I've ever seen."
She reached around and tweaked my nipples, flooding my brain with the memory of Rodney, just like last night. I wondered where he was and how I could find him. I could hear him in my head. "You want to. You know it." He was right. Not only did I want it, I wanted him. That pushed me right to the edge, and when Caylin pinched my nipples again, I erupted, spilling 30 years of need I didn't realize I had into a man I'd just met.

And here's the inspiration for the story:

This story was a submission to the sixth Friendly Anonymous Writing Challenge (FAWC) and a tribute to the founder of FAWC, slyc_willie, whom we lost unexpectedly in October, 2015. The true author of this story was kept anonymous until the end of the competition. Authors based their story on a list of four items. Their choices included the following letters: S L Y C. Each item was used in the story. There were no prizes given in this challenge; this was simply a friendly competition.

The list for this story included: (yearn, yarn, yodel, yacht)
The story started with the yodel. I saw the list and thought, “How the fuck do I get yodeling into a smutty story?” In my mind, I heard the music from the Cliffhanger game on The Price Is Right, and I went right to the image of a young man having an experience with another man. Then I heard Bob Barker in Happy Gilmore saying, “That was not nice and easy.” That gave me the other piece of the puzzle: the trigger for the gay flashback. The rest of the story spun from there.

I didn’t win the FAWC 6 challenge (although, I did win FAWC 4 with Gay Greenhorn on the F/V Lost Agnes.) Simon el Gorza took home the virtual trophy for the FAWC. I did, however, win the 2015 Reader’s Choice award for the Chain Story category with this story. I hope you enjoy it.