Another Dirty Excerpt: Gay Greenhorn on the F/V Lost Agnes 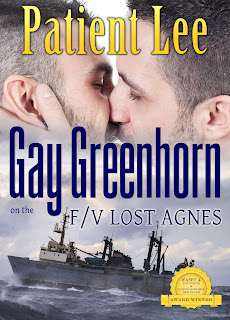 
Of all the stories I've written, I'm pretty sure this one is my best. I wrote it for the 4th Friendly Anonymous Writing Challenge on Literotica's Author's Hangout.


The challenge was to write a story based on one of four songs. I chose Midnight Train to Georgia by Gladys Knight and the Pips. "LA was too much for the man." I don't know what steps my brain took, but within minutes, I knew that my story would be about a different "LA" altogether. The same lure of fortune as Los Angeles, and just as tough for a newbie to handle.

My LA is a crab boat. The Lost Agnes. Don't know where I came up with it, but it worked later on in the story. Just like the song, two people fall in love. One is comfortable with LA, the other fails miserably, forcing both lovers to choose the life they know or the one they love.

I flirted with the idea of a woman on a crab boat, but it would open a whole other can of worms, which Deadliest Catch was already tackling. Eliminating the woman was easy. All I had to do was write in a category I hadn't written before: Gay Male.

So I did it. And I won the contest. The prize was a virtual trophy, nothing more, but because the names of the authors were not revealed until the winner was revealed, the stories were judged by merit, rather than popularity of the author. It's my most satisfying contest win, and probably the best writing I've done so far.

And here's your dirty excerpt:

A Note About FAWC:


I dedicated this story to Slyc_Willie (A.K.A. Gabriel Daemon). Slyc created the Friendly Anonymous Authors’ Challenge (FAWC) on the Authors’ Hangout forum on Literotica.com. Each FAWC presented a different challenge.

FAWC 2: Each story in this challenge is centered around a random determination of four "mystery ingredients."

FAWC 3: (Inspiration for this and all FAWC 3 stories was taken from a single picture, which can be found here.)

FAWC 4 (Gay Greenhorn was the winner.):  This FAWC was based around the theme of music, with four songs given to choose from. "Written in Rock" by Rick Springfield, "Midnight Train to Georgia" by Gladys Knight and the Pips, Tomorrow We'll See by Sting, and Oh, Is There Not One Maiden Breast from Gilbert and Sullivan's The Pirates of Penzance.

FAWC 5: Every story for this FAWC begins with the exact same line. Where it goes from there is up to the author:  Upon the table lay three items: a handkerchief, a book, and a knife.

FAWC 6: Authors based their story on a list of four items. Their choices included the following letters: S L Y C. Each item was used in the story. This FAWC was held in memory of Slyc_Willie, the originator of FAWC.

I participated in five out of the six FAWCs, and they were some of the most fun writing experiences ever. I credit FAWC 2 to boosting my writing career at a time when I probably wouldn’t have had the passion to continue.

Thanks for the FAWCking memories, Slyc. Rest in peace.