Dirty Excerpt: Collared in the Temple of Dendur 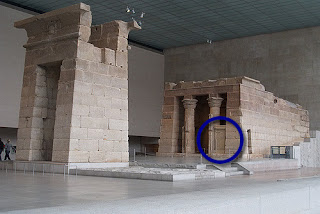 When I was in high school, an Egyptian man who worked with my mother gave her a scarab carved from some kind of blue stone. He said it was for luck. We had no idea if it was luck or a curse, and the Internet was ten years away at that point. When I started writing the story, I thought about that blue scarab, which led me to setting the story of public sex in the Temple of Dendur exhibit at the Metropolitan Museum of Art in New York City. I'd been there with a group of foreign language teachers in 2002, and combined with what I could look at online, I think it worked.


The couple in the temple with us spoke a language I didn't recognize, and I felt as though they stood right behind us, waiting their turn to see what was etched on the wall where we stood. They must have assumed that they'd find some important treasure there if this professor was giving private lessons to his conscientious student, who was writing each word with loving care. I gave a quiet sigh of relief when I realized that they probably didn't understand what Ammon said. I saw them leave out of the corner of my eye.
He slipped his fingers between my lips, into my cunt. "Dripping wet, love. You want this, don't you?" I nodded silently, and he moved his fingers to my clit. I fought to stay still, to wait for his attention to the erect nub. My pussy burned with the need to come, but I wouldn't until he said it was time. That was our agreement. My hips wanted to move, but I stood as still as the replica of the Sphinx next to the temple, waiting for his instruction.
Instead, he moved his finger back to my opening, and pushed two fingers inside me, his fingertips brushing my G-spot. I craved movement, but I remained in place, screaming silently in my head, "Oh my god, just rub my fucking clit." After six months of his training, I knew. The anticipation made the orgasm hotter and sweeter. It would be worth the wait.
He pulled his fingers out of me and placed them against my mouth. "Taste yourself, love," he said, not bothering to whisper. We were alone in the temple for a moment. I parted my lips and sucked his fingers into my mouth. He spread his fingers so that one went to each side of my mouth, and I could taste the salty flavor of my own cunt spreading across my tongue. I licked them clean, sucking on them, trying to drive him to fuck me.
"Take your folio in your left hand. Leave it open. Take your right hand and put it between your legs," he said, still in a tone loud enough for other visitors to hear. "Good girl. Don't move your fingers yet." I was worried about my skirt being lifted in the front, but his large frame hid my body from the tourists that popped their heads around the corner to see what was in the temple. The museum would be closing in forty-five minutes. They didn't have time to linger in the ancient structure.
I was overcome with lust. I needed to come, and I couldn't stand still much longer. My nipples were so hard they ached, and my clit throbbed against my fingers, harder and harder, the swollen nub ready to explode. My arm was tiring from holding the folio up for so long. He finally took it from my hand and held it, making sure it hid the raised front of my skirt.