Dirty Excerpt: Come with a Friend

Come with a Friend 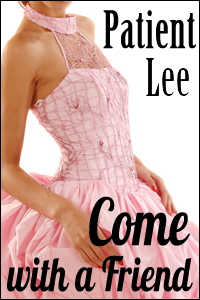 An eighteen-old-man with a tragic life and a history of being bullied reconnects with a childhood friend who cooks up a scheme to take revenge on the bully of their youth. But is revenge the real reason for Jason wearing a gown to the prom? Or could it be love?


They both laughed, and Timmy went to the door to switch the lights off again. Kari held her arms out, inviting him back into her embrace. They resumed their kiss, just as passionate as the earlier one.

Kari was fully erect in seconds, her cock pushing against the crinoline under her taffeta skirt. Timmy took her hand from his ass and placed it over his erection, squeezing her hand around him. Then he moved his own hand to Kari's hard-on, not caring if her pre-cum soiled her skirt. He rubbed up and down her cock, moaning into her mouth as he did. "Kari, you're so hard for me."

He pushed her gently by the shoulders until her back was against the wall, and he got to his knees in front of her. His cellphone remained in his hand, and in the dim light, he looked up at her. She was terrified, and it showed on her face, but she made no move to stop him. He placed the cellphone on the floor next to him and reached under her skirt. His hands searched through the layers of the dress until he found her ankles. He ran his palms up her legs, making her giggle nervously.

"I didn't shave my legs," she said, embarrassed.

Timmy paused and looked up at her. "I'm gay, Kari. Hair doesn't bother me." He moved his hands up to her ass, and rubbed her buns, exposed by the slim strip of fabric on the back of the panties she wore. He slipped a finger under the elastic of the silky garment, making her shiver. Her erection poked at his face through the fabric. He grabbed at the layers of material again and ducked his head under the dress. Kari grabbed the hem and pulled it above her waist, allowing him access to her body.

Kari's knees went weak as Timmy's cheek brushed against her thigh. His face rested along her satin-covered cock, and she sighed with a contentment she hadn't felt since the day before she moved away from Mulberry Street. She rubbed Timmy's hair with her free hand, the other still holding up her skirt. "Oh, Timmy," she said, almost in a moan.

It worked. "Oh, fuck. Oh, fuck," she said, all traces of her fake accent having vanished in her moment of abandon. Her knees shook, but she dropped her skirt over Timmy, and used both hands to grip his head through the fabric. "I'm coming in your mouth, Timmy. Oh, god."