Who Needs a Filthyrottendirty Dose of Patient Lee? 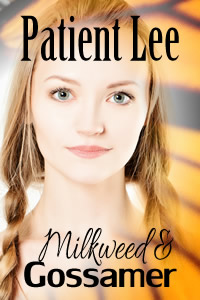 When the food was gone, Jaime showed him the fish pond at the other end of the garden. They sat on a wooden bench, watching the enormous red and white Koi swim through the shallow water. The incandescent lights at the bottom of the man-made pond cast a soft glow on the corner of the garden. “This is my favorite spot in the world,” Jaime said. “I come in here at night all the time.”
“It’s very romantic,” Josh said with a soft smile on his lips.
“Romantic?  That’s the first time I’ve heard a guy use that word!”
“What? It is!” he said. “The lights, the sound of the water, the smell of the roses, the girl next to me . . . ”
They kissed again. This time Josh slid his hands under the hem of her shirt. She giggled when his fingertips trailed over her belly. “I’m sorry,” he said, pulling his hands out. “I’ll stop.”
“No!” she said with definitive force. “You’re just tickling my tummy.”
“Oh. So, you’d rather I move my hands up a little higher? Is that what you’re telling me?” He wagged his fingers again, bringing another fit of giggles. She grabbed his wrists and pushed his hands right up to the lace cups of her bra.
“No,” she said, holding her hands over his, as if she was cupping her own breasts. “I’m telling you that I’m terribly ticklish, so don’t touch me there.”
“But here’s good?” he said, rubbing her nipples with his thumbs.
“Yes. Very good.” She relaxed and let her hands fall to Josh’s thighs. Her hand trailed closer to his fly, and he shuddered.
“You’re making me hard, Milkweed,” he said in a raspy voice. “I’m just warning you.”
“Right here? Is this where you’re hard?” She placed her hand over his bulge and gave it a squeeze through the denim.
“Oh, yeah. Right there.” His voice was a moan.
Josh’s brain relinquished control and let his cock do the thinking. He moved his hands up higher on her chest, lifting her shirt and revealing the red lace on the cups of Jaime’s bra. He tipped his head to get a better look at her tits, and then he slid his hands back down, inside the cups this time. She closed her eyes and took a deep breath, the moan in her exhale giving him permission to proceed.
“Can I take your shirt off?” he whispered.
“Uh-huh.” She nodded and moved her arms to make it easier to remove. Her braid got caught on the butterfly-shaped button on the pocket of the shirt, causing her to yelp at the tug.
“Shh!” Josh warned, smiling at her while he fought to untangle her hair.
“Ow,” she said, quieter this time. “It’s a good thing our house is so far down the road.  All we’d need is for Dad to hear me hollering in pain.”
While Josh wrestled with the shirt, Jaime reached behind her back and unhooked her bra.
He finally got the shirt free, and he caught the first glimpse of her bare breasts. His mouth dropped open. Her perfect little tits, her nipples standing straight out of their centers enticed him. In the dim light of the fish pond, he couldn’t determine the color of her nipples, but he dropped his head and took them in his mouth, first the left then the right.
“Oh, my god, Josh. That feels so good,” she said in a shaky voice.
He flicked his tongue over the hard nubs and wondered if she had ever sucked a cock. He knew she was a virgin—Scott had been quite clear on that point—but lots of high school girls gave blowjobs. Josh had received a few at high school and college parties from girls that were desperate for attention, but it had been a long time since he had a pair of lips wrapped around his cock. Oh, please, he thought to himself. Please let me get lucky.
He was lucky.


Available on Amazon, Barnes and Noble, iBooks, Google Play, and Kobo. Check it out at Patientlee.com.
Posted by Patient Lee at 3:27 PM