Flash Fiction: Alex and the Intern 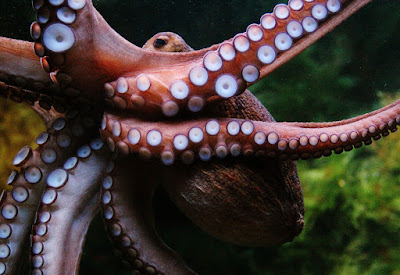 Last weekend, I participated in the WritersWeekly.com 24 Hour Short Story Contest. In this contest, we had 24 hours to write an 850 word story following the prompt below.

It was supposed to be the summer job of a lifetime, working as a chef at an upscale "summer camp" for adults. But, the air conditioner was broken again. After closing, the stale outdoor air brought little relief. The path to the cabins housing seasonal employees was dark but short. She stopped in her tracks when she came across one of the windows. With her pupils dilating, she couldn't look away...


I was traveling with my parents and my three children when the contest started, so between sleeping in the car and unpacking, I wasted about six hours dancing around the first thing that popped into my head: octopus. For a less-than-two-minute education on octopuses (yes octopuses,not octopi), click here for a clip from Animal Planet's show Tanked (one of the few shows my family watches together with no grumbling). 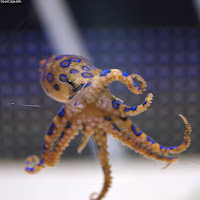 After struggling and sketching and trying to pull the story together, I was beginning to lose hope of bringing it together. But then the clouds opened up, the sun shone down on me, and Tool came on. Schism is my writing song. "I know the pieces fit." (See the video below.)

My parents took the kids to the beach, and by the time they returned, the story was half-written. I finished twelve hours early. Amazing what a little quiet time can do for the creative brain.

Here it is, for your enjoyment.

Alex and the Intern 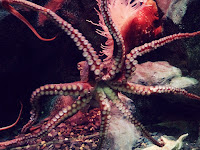 On the third day of Tanisha’s internship at Camp Wine and Sea, the octopus escapeyd, as though he thought by dinnertime, Chef Roscoe would be arranging his tentacles on a bed of rice pilaf.

It wasn’t true, of course. Alex, the Great Pacific Octopus, had been a dining-room fixture at the camp since it opened. Octopus was Chef Roscoe’s specialty, and it was on the menu every Saturday night, but Alex wasn’t dinner. He was the camp mascot, and he provided conversation fodder for the uncomfortable adults sharing tables with strangers on the first night of camp. Until the wine started flowing, Alex kept the party going.

"Again?” The chef groaned. “One of these days, I’m going to serve that monster in a tomato confit, I swear. Get the intern to look for him.”
Peter raised his eyebrow. “You want to leave that to her? She’s made a dozen mistakes since she got here. Besides, don’t you need her in the kitchen?”
“Would you rather she pour wine tonight?” The chef dismissed him without another word. Instead, Peter performed a cursory search of the kitchen and dining room himself, and when the first guests entered the dining room, peering into Alex’s tank, he distracted them with Sauvignon Blanc.

A misogynist, Chef Roscoe resented the management’s choice of intern for the summer. Tanisha Jones didn’t care what Chef thought. She’d earned her place in his kitchen with her 4.0 at the university and three wins in prestigious cooking contests. Even though he’d blamed every error in the kitchen on her since she arrived at camp, she was ready to stand tall against his pompous attitude.

While Chef was in the dining room announcing the evening’s menu—octopus braised in red-wine with Kalamata olives—Tanisha tended to the pots and pans on the stove. When he returned to the kitchen, he barked three orders in a row to her, and before she could do any of them, he said, “And put that octopus over there in the big pot for the third seating.”

Tanisha followed his instructions to the letter, knowing it didn’t matter. Chef set her up for failure every time she turned around, but she did her best for the sake of the diners who were paying a small fortune for a week at the adult summer camp.

The air conditioner quit halfway through the second seating, and by the end of the third, heat exhaustion threatened to knock out the staff. Tanisha and Chef Roscoe cleaned the kitchen as quickly as they could, and just when she thought she’d get some relief from the heat, her nose detected the odor of spoiling food. She scanned the kitchen, looking for the forgotten piece of fish or scrap of meat.


Sniffing the air, she followed her nose to the corner of the kitchen where she found a metal bowl containing an octopus, ready for the cooking pot if it hadn’t begun to rot from the intense heat in the cooking area. Swallowing the urge to vomit, she called, “Chef. You have to see this.”

“What the hell?” His eyes narrowed in anger. “You were supposed to cook the octopus. What did you cook?” His voice rose in pitch as his anger increased.

“The octopus in the jar over there!” She pointed to the counter next to the stove. “It was right next to the pot. I assumed that was the one you meant!”

Chef shook his head and chuckled without humor. “You idiot. You know Alex got out today, right?”

“Alex from the dining room?” Her face fell as it dawned on her. An octopus could open a jar to hide in it. “Did I cook Alex?” Her voice was a whisper, punctuated by projectile vomit as she accepted the truth. She’d cooked the camp mascot. 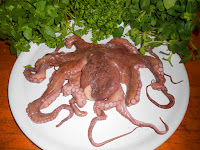 After cleaning her mess and the putrefying octopus, she stepped into the dark, wishing for relief from the heat. Instead, the stale air knocked her back a step, nauseating her again.

Regaining her balance, she started down the dark path to the employees’ cabins. Worry ran circles in her head. Would the camp administration fire her? Would animal rights activists call for her head on a pike? Could she live with herself after making such a horrific mistake?

She heard Chef Roscoe’s voice, stopping her short. She turned and found herself at his cabin, his open sitting-area window providing her a view of his kitchen. He sounded as if he was speaking to a puppy. “I got that uppity bitch. Yes, I did, Alex.”

Her eyes flew open, pupils dilating, when he stepped into view. Any thought that he’d stolen Alex to keep as a pet vanished as he placed the platter on the table, the octopus moving listlessly as it languished out of water.

Tanisha’s scream couldn’t save the octopus as Chef brought the cleaver down on Alex’s bulbous head.

We'll see how the judging goes in about six weeks. If you enjoyed this non-erotic venture, please leave a comment here on my blog. (If you're reading this from my regular website, click the link at the bottom to go to the original.)